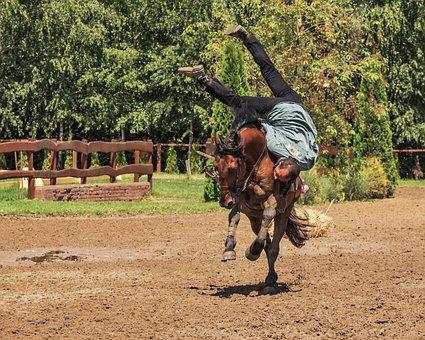 Piggin’ strings and bucking shoots used to be a part of my everyday life. Rodeo clowns were constant companions and mutton busting came to be one of my favourite things.

Founded in Pecos, Texas, years ago, rodeo has become synonymous with America’s wild west legacy and the standing has been well-earned. Competition consists of non-paid athletes who need those prize dollars to maintain’goin’ down the road.’

As a national spokesperson for the Adolph Coors Company, I lived on the road and attended one event per week. Peter Coors signed my check and his new passion was rodeo, therefore I saddled up. For forty six weeks straight, I rode horseback in professional rodeos across the country-from Albany, New York to Poway, California.

Twelve cases of beer, Coors, of course, were sent to my hotel room everyday for me to give away for”goodwill.” Host hotels often booked me in their best rooms and re-named them the”Bridle Suite.’

One day, we were lined up in a rodeo in Rock Springs, Wyoming, to ride the”circle 8″ By the time we completed the opening pattern, Lane was dead.

Lane Frost was my friend in rodeo. His last interview was with me in Santa Maria, California and I saw snippets of the interview on the news over and over and over. Then, they made the movie”8 Seconds” and it tried to do justice to his life.

The film didn’t touch how deep the friendship between Lane and Tuff Hedeman was. I was with Tuff in the very next rodeo in Fort Madison, Iowa, and he showed up, ready to ride and do the press tour. Tuff and I were auctioned off at a benefit for some charity. We had to dance with someone who had bid on us. “How are you here?”

One month of the year, I did an alcohol awareness junket. The goal was to balance the promotion of beer with a reasonable warning of its danger. No press was booked and I was sent to Indian reservations-mostly in New Mexico and Arizona. One visit to the Navajo reservation in Window Rock, Arizona, was enough to get the full impact of the disadvantage of alcohol use among the Native American people.

So Native American lives are obliterated by ethanol alcohol because of their inherent trait of never having consumed’fire water’ before white man brought it from Europe. We brought the potent drinks when we came to develop and settle to the territories which would later become the fifty states. The signs of alcoholic damage is evident and far-reaching when one visits the reservations.

At a time when family events are rare, rodeo still holds the attention of all ages. There are two kinds of competitors-riders and ropers-and it is thrilling to see a horse and rider compete as one in the arena. I’ll never forget the year that I spent”going down the street” with those happy horse people and of my short exposure to the damage caused by ethanol brews to our Native American population. Go to Fort Lauderdale FL Wildlife Control for more information.